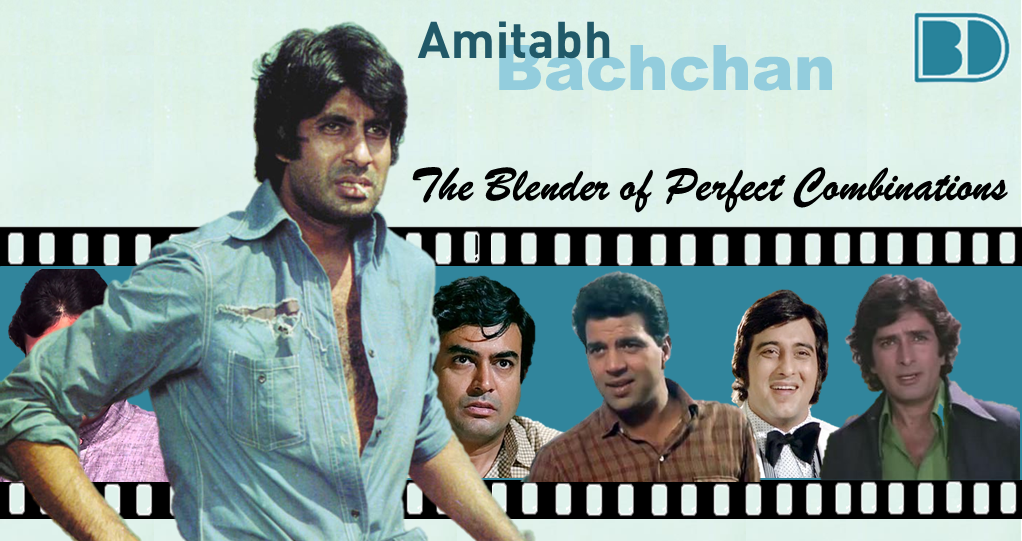 Over the years, we have seen many great actors; we have seen many entertaining actors and have also seen many popular actors in Bollywood. But, nobody has got the attention and limelight for so long and towered over the rest as Amitabh has for much of his 46-year-long innings.

Amitabh Bachchan is certainly the strongest imprint, Bollywood has left in the lives of Indian cinema lovers.

Amitabh Bachchan kept himself evolving and adapting to the times of Bollywood and kept challenging the undefined boundaries of an actor´s limit. He was popular for his “Rebel” characters and also for his romantic styles. But, one thing which has always been ignored about him was his ability to support the other male protagonist of the movies. He played supporting roles with many actors and each time he adapted himself to their style, like with Rajesh Khanna, Dharmendra, Vinod Khanna and many more. Let’s have a hindsight over his chemistry with his male co-stars.

Amitabh Bachchan and Vinod Khanna were the two giants of Bollywood in the ’70s and worked together in 10 films. Sometimes they played brothers to each other, sometimes friends; and onscreen competition was a bonanza for the audience as it brought the best out of them. The super hit pair delivered five enormously successful and entertaining films together – Hera Pheri (1976), Khoon Pasina (1977), Amar Akbar Anthony (1977) Parvarish (1977) and Muqaddar Ka Sikander (1978). Even though Amitabh played the lead role in their films, Vinod managed to steal the limelight from him at times with his devastating good looks. While the Big B is a legend, industry naysayers have said that Vinod could have outrun him had he not left the industry at the peak of his career.

The Superstar who witnessed the Rising star – Rajesh Khanna

The rivalry among the stars is not the talk of today’s Bollywood scenario rather it has been leaving its foot marks since the day one. Decades back, the rivalry between the two superstars – Rajesh Khanna and Amitabh Bachchan was the hot talk of the town. Rajesh Khanna did only two movies with Amitabh Bachchan and at the two very different point of his career. When Amitabh Bachchan had entered into the industry, Rajesh Khanna was already an established star. As a cancer-stricken patient in Anand, Rajesh Khanna was a delight to watch. Decidedly he had an edge over Babu Moshai, played poignantly by Bachchan. But by the time they appeared together again in Namak Haram, the equations had changed and Amitabh was the new Superstar. But, watching them together in a movie was a delight for the cinema lovers in any period of time.

The “Do Aur Do Paanch” Combination – Shashi Kapoor

It all started with “Roti Kapda Aur Makaan” and then they worked together in the superhits like Deewar (1975), Kabhi Kabhie (1976), Trishul (1978), Shaan (1980), Silsila (1981) and many more. Together they formed, arguably, one of our most popular two-hero combinations ever, from whom the audience allure and box-office expectations was next to only one pair, i.e. Dharmendra and Hema Malini.

Bachchan ji once said that “Shashi Kapoor and I became inseparable in many successful ventures that followed. Leading ladies would shy away from our projects by proclaiming that there would be nothing left for them to do once SK and AB were there together.” Though both worked a lot in the ’70s and ’80s, the clear secret of their collaboration was their obvious off-screen comfort zone coming up trumps on-screen as well. Their relaxed demeanor at work was there for all to see.

Dharmendra was one of the few actors during the 70s and 80s who could come close to matching AB’s charisma and star power. During the 70s and 80s, he gave quite a lot of hits in an era dominated by Amitabh. Dharmendra and Amitabh were very similar in respect of their camaraderie with other male leads. And together they  performed the most popular on-screen friendship of “Jai and Veeru” in movie “Sholay”. Apart from that they worked together in two other movies, “Ram Balram” in 1980 is the lesser known of the two because the other one happens to be the Hrishikesh Mukherjee´s “Chupke Chupke”, which is all time classic. The on-screen rapport between them was as a guarantee for entertainment.

From playing Amitabh Bachchan’s father in ‘Trishul’ to playing the husband of his former beloved in ‘Faraar’, Sanjeev Kumar is still remembered for playing a variety of roles on the big screen with Amitabh. At a time when actors were branded as a romantic hero or action hero, Sanjeev Kumar was one actor who was difficult to typecast. And Amitabh Bachchan plays stick to stick and walked a yard to yard while working with him. Who can forget the “Thakur” who manage to convince “Jai” for his motive in Sholay. Or who can forget the duel between father and son in “Trishul”. They worked together in 5 superhit movies like Silsila, ImaanDharam, Trishul, Khuddar and Sholay.

Rishi Kapoor worked with Amitabh for the first time in 1976 in Kabhi Kabhi. He later usually played Amitabh’s friend or younger brother in films such as Amar Akbar Anthony, Naseeb, and Coolie. The flamboyant personality of Rishi Kapoor was well matched by Amitabh with his serious persona in the movies. Young Rishi Kapoor came as an answer to the roles, which directors planned for his uncle Shashi Kapoor (who was not able to play younger brother roles due to his aging). Rishi Kapoor took the challenge to substitute his uncle from the super hit combination of Amitabh and Shashi and marked his own partnership with Amitabh. The last time they came together was for Shashi Kapoor’s only directorial venture Ajooba, that was 22 years ago. Now, the Big B and Rishi Kapoor are all set to reunite for Sudhir Mishra’s “Mehrunissa”.

The Yaarana of Jai and Gabbar – Amjad Khan

In normal life, Amitabh Bachchan and Amjad Khan were great friends, but on screen they normally found each other on the morally opposite side of the story. They worked together in more than 10 movies, importantly Parvarish (1977), Muqaddar Ka Sikandar (1978), Mr. Natwarlal (1979), Lawaaris (1981), Yaarana (1981) & Nastik (1983). But, it all started with “Sholay”, where their stellar performances created the immortal masterpiece of Bollywood.

Amjad Khan kept himself improvising and gave many memorable negative characters against Amitabh. The on-screen rivalry between them kept the audience engaged and thrilled. But, “Yaarana” was a totally different movie in compare to others, where Amjad Khan played a role of a best friend of Amitabh and the song “Tere Jaisa Yaar Kahan” was a superhit. They remain friends until the unfortunate death of Amjad Khan.

The Dostana with Shotgun – Shatrughan Sinha

They came together on screen in Parwana (1971) first, where Shatru just made a guest appearance in the film. The real chemistry between the duo was seen in Bombay To Goa (1972) where Amitabh played a fun-loving guy who came between the leading lady Aruna Irani and the suave villain Shatrughan. They reportedly shared a good rapport off-screen; encouraging producers and directors to cast them together. Even with all the Amitabh-Shatru movies, Shotgun was never really overshadowed by Amitabh’s stardom.

Their next film, Kala Patthar (1979), is the prime example of the classic Bachchan-Sinha camaraderie. Shatrughan Sinha had a role with better lines and even won the audiences’ sympathy with his character dying a brave death. Amitabh, on the other hand, had a silent brooding role. But when they came on screen together, it was pure entertainment. The off screen tussle began at the time of Dostana (1980). With their growing egos, neither Amitabh nor Shatru wanted to work together. However, things looked better when, keeping their personal differences aside, Shatrughan appeared in the next Bachchan-dominant movie, Shaan (1980).

The Surfing with the Southern wave – Rajnikanth

Amitabh had already some experience to work with the India’s most popular heartthrob like Rajesh Khanna and Dharmendra, but working with Rajnikanth was totally different for him. It was the time when Superstars from The South were trying their hand in Bollywood for the first time. Producer were eager to try Amitabh- Rajni combination to have their reach in the south. They worked together in three movies – Andha Kanoon (1983), Geraftaar (1985) and long after Hum (1991). Even they were the superstar, their humility made each other comfortable on screen and off screen. The most remembered movie was “Hum”, where they played brothers to each other and their comedy timing along with Govinda left everybody laughing.

The Sehansaah and the Baadshah twain– Shah Rukh Khan

It was a time when Amitabh Bachchan was playing the elderly roles and Shah Rukh Khan was playing the roles, which two decades back would have penned for Amitabh. They have their own styles, but one common thing was their dedication. The first time, they were seen in together in “Mohabbatien” (2000), where Amitabh played a role of strict Principal and Shah Rukh Khan enacted the character of “Raj Aryan”. The On –screen combat of generation was grand to watch and audience gave a very good response to this pair. Then came the movies like Kabhi Khushi Kabhi Gham (2001), Veer-Zaara (2004), Paheli (2005) and Kabhi Alvida Na Kehna (2006). Their professionalism has always brought the best out of them. Hope there will be more to come from this pair. 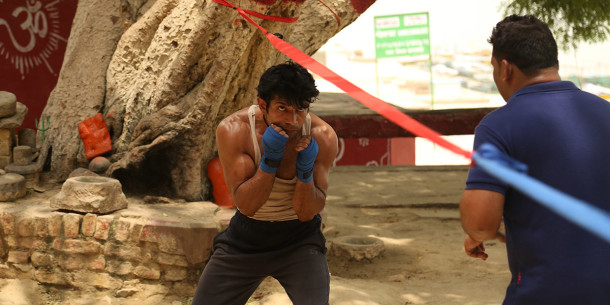 I was Selfish While Writing Mukkabaaz: Vineet Kumar Singh 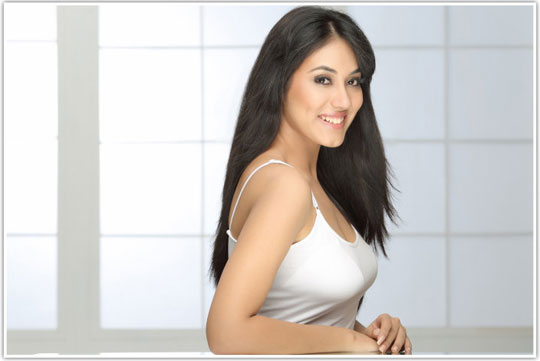