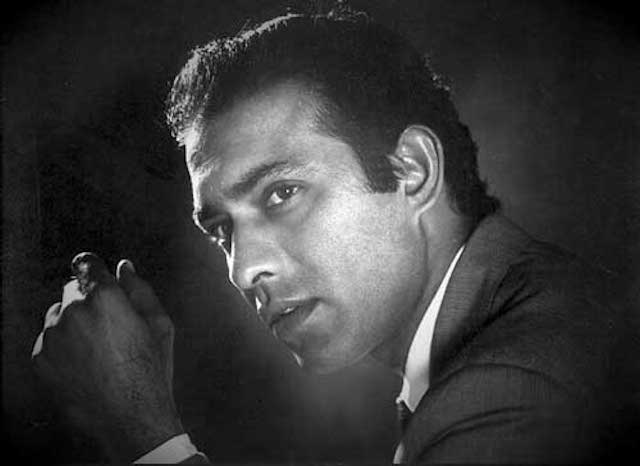 It’s been awhile since I published my post on Talat Mahmood’s solos. And my post of Talat-Lata duets. Somehow, it was hard to find the energy to blog. But on the bright side, things are – literally – warming up, and it is cheery to actually see bright sunlight and know that Spring is perhaps only a month away. (For all I know, Old Man Winter might decide to drop a foot of snow on us next week! Keeping fingers crossed.)

I also found it is harder to sort through and pick Talat’s duets with other singers than I did for anyone else in this series. Usually, my dilemma is ‘what should I leave out?’ But this time around, most of them, as you know, happened to be his duets with Lata. Finally, after some pretzelling, I whittled my list down to a manageable ten songs. Let me begin with another Talat-Lata duet…Talat Mahmood – Lata Mangeshkar 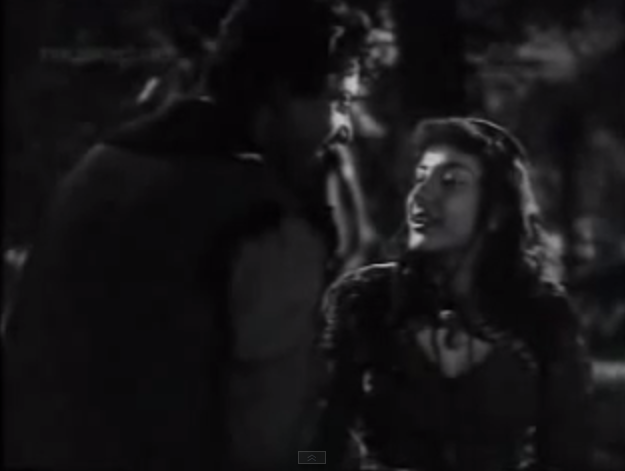 Tere saath chale hain wasn’t even on my list of Talat-Lata duets, but it’s a song that has grown on me since I heard it for the first time a few weeks ago. Picturised on Nasir Khan, better known as Dilip Kumar’s brother, and on Nargis, this is a mellow, romantic number – the sort of song that Talat Mahmood could probably sing in his sleep. Also, though the song itself is a ‘soft’ one, Lata is consistently hitting the high notes without it being apparent. Her control over the notes is that effortless, and Talat’s deeper (and lower) ‘voice’ is a perfect complement to hers. I like this song as much for the musical interludes as I do for the melody itself. 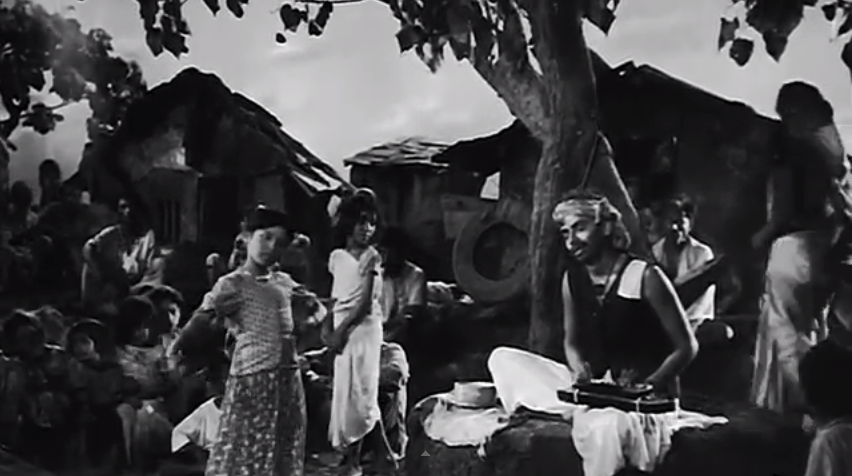 Boot Polish (1954)
Music: Shankar Jaikishen
Lyrics: Shailendra
I had Do dil dhadak rahe hain aur awaaz ek hain from Insaaf on my short list, but decided to post this instead, because there is a contrast between the words as sung, and its picturisation. The juxtaposition of happiness (the girl is excited at going away to her husband’s home) and sadness (a brother missing his sister who is separated from him) makes the pathos even deeper. The song was picturised on lyricist Shailendra who appears as the blind beggar, and on Baby Naaz who plays the little girl separated from her brother. (There is also another girl, seen in the screenshot above, on whom the first part of the song is picturised, who is uncredited.) Though the story is ostensibly about both siblings, it is Naaz who steals the show (she won a special mention at the Cannes Film Festival). She was around 6 or  7 when she acted in Boot Polish, and was a complete natural in front of the camera. It was perhaps one of the few films of the time (or even later) where children on screen remained normal children instead of precocious mini-adults. 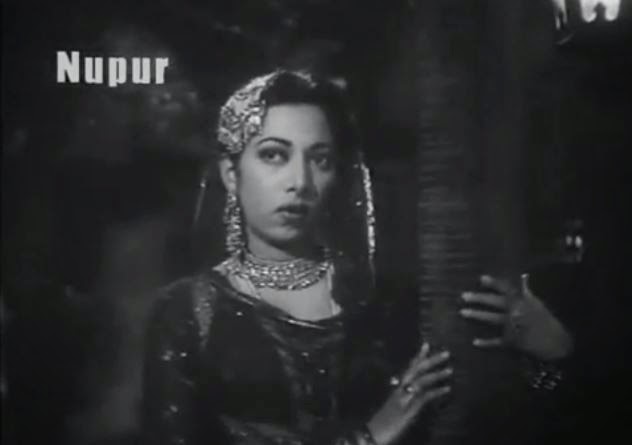 Mirza Ghalib (1954)
Music: Ghulam Mohammed
Lyrics: Ghalib
It’s a cinch which songs come to mind when you think of a Talat Mahmood-Suraiya duet. Raahi matwale from Waris or this one. After Lata, I think it was the Talat-Suraiya combination that really called to your emotions – his soft-as-silk voice blends beautifully with Suraiya’s husky vocals. It is they who make this film come alive, because while Sohrab Modi paid great attention to historic detail, the film could have done with a tauter script and tighter editing. But Modi assembled a stellar crew – Saadat Hasan Manto wrote the story, Rajinder Singh Bedi wrote the dialogues, while Ghulam Mohammed set Ghalib’s poetry to music. This is one of my favourite ghazals of all time – telling a tale of two people who love each other but who cannot be together because of circumstances they cannot control. They spill their emotions out in verse, asking the most rhetorical question of all time – Dil-e-nadaan tujje hua kya hai? Of course they know what’ s happened to their hearts.
Talat Mahmood – Geeta Dutt 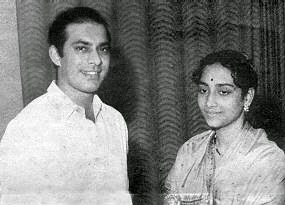 4. Keh rahi hai dhadkanein pukar kar
Lal Pari (1954)
Music: Hansraj Behl
Lyrics: Asad Bhopali
To me, Talat Mahmood and Geeta Dutt made a perfect combination; they had the same sort of voices – soft, slightly husky, full of pathos. Perhaps it is confirmation bias, since both singers have their fair share of angst-ridden songs. Perhaps that is also why I steered clear of their sad duets, of which there are plenty, to pick a lighter, romantic one. It is always a pleasure to hear Geeta Dutt, especially in her not-so-sad songs (Of which there are plenty, but she is boxed into the image of a serious, pathos-laden singer.), and it is great to have Talat accompany her. Unfortunately, there is no video of this song available, so one merely guesses that it was picturised on the lead pair – Mahipal and Shakila. The other song that was on my short-list of their duets was the equally romantic Armaan bhare dil ki lagan (Jaan Pehchaan). The only reason this made the cut was because, right now, I like this song better than the other.
Talat Mahmood – Shamshad Begum
5. Mohabbat dil ke bas itne se
Mangu (1954)
Music: OP Nayyar
Lyrics: SH Bihari
An obscure film, but with such lovely songs, Mangu initially had Mohammed Shafi as the music director and he did compose one song in the movie. But OP Nayyar seems to have composed all the other songs. Mangu, according to IMDB, was produced by Sheikh Mukhtar and starred him, along with Sheila Ramani and Nigar Sultana. With no video to check, I have no idea who this song is picturised on – probably the second lead, since OP was the MD and Asha Bhosle is also among the singers listed in the credits. But it is a lovely song, nevertheless, and worth a mention. 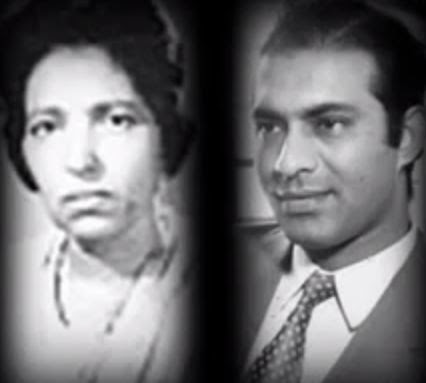 Baadal aur Bijli (1956)
Music: Bipin-Babul
Lyrics: Anjum Jaipuri
Another obscure film, another music director duo that I had never heard of, and a song that I first heard just a few weeks ago when I was researching Talat’s solos. Yet, I have always liked Mubarak Begum’s voice in the few songs that I’ve heard of hers, so this was perfect. Once again, I liked the song as much for its lilting romance as much as I did for the musical interludes. My other choice for a Talat-Mubarak Begum duet was the equally romantic Zara kehdo fizaaon se from the equally obscure Gogola (1966). I have never heard of this movie until I came across this song, and I have no idea what the title means, or what the film is about. The score is composed by another music director that I have never heard of – Roy Frank. 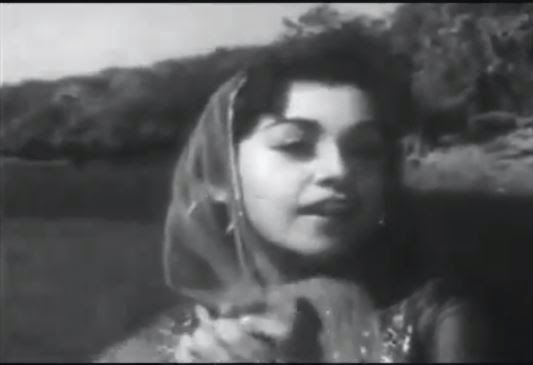 7. Sun le meri jaan
Pyar ki Dastan (1961)
Music: Nashaad
Lyrics: Sarvar
Pyar ki Dastan is not an obscure film by any means, but the Ameeta-Sudesh Kumar starrer was not a box office success. And while music director Nashaad (born Shaukat Ali) is certainly not unheard of, he is not as well-known or popular as some of his peers. Lyricist Sarvar is certainly obscure, having (as far as I have gathered) written lyrics only for two songs. The lyrics of this song are pretty decent, so I wonder why he never made a career in the film industry. Suman Kalyanpur returns to singing under the baton of Nashad, who gave her her first break in Darwaza(1954). According to talatmahmood.net, Suman Kalyanpur sang her first ever duet with Talat Mahmood for that movie.
Talat Mahmood – Sudha Malhotra

Another beautiful melody from yet another another obscure film, Ek baar toh mil lo gale is picturised on Chitra (whom I recognise from a film that I recently watched) and Amarnath – neither name nor face ring any bells. One of the few ‘sad’ songs on this list, it sings of separation as the heroine (?) is led away to her death while the hero watches helplessly. Lyrics by Bharat Vyas (no relation to the music director) emphasise the impending separation and hopes for a meeting in the hereafter. 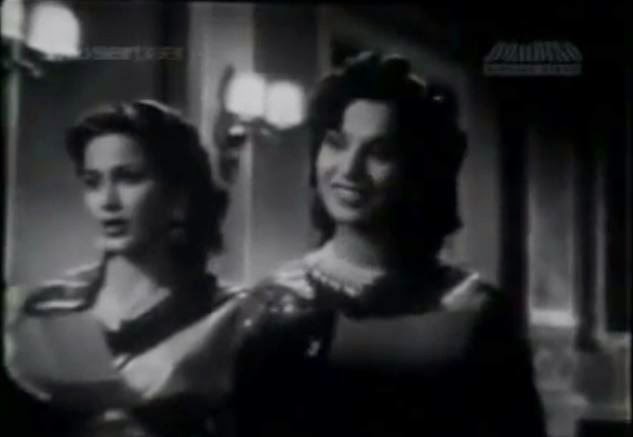 My usual restriction for posts on duets is that it must not involve a third singer or even a chorus. I’ve broken my own rule for this song, primarily because I wanted to include this song, and partly because, as I mentioned earlier, there aren’t that many choices when it comes to duets with different singers – none that I particularly like, anyway. Dil-e-Nadaan is Talat Mahmood’s first ever appearance as hero in a Hindi film made in Bombay. His co-stars were Shyama, who made no secret of her admiration (and attraction) for her handsome hero, and Peace Kanwal, a debutante picked after a nation-wide talent/beauty search. While Talat sings for himself, Sudha Malhotra playbacks for Shyama, while Peace lip-syncs to Jagjit Kaur. 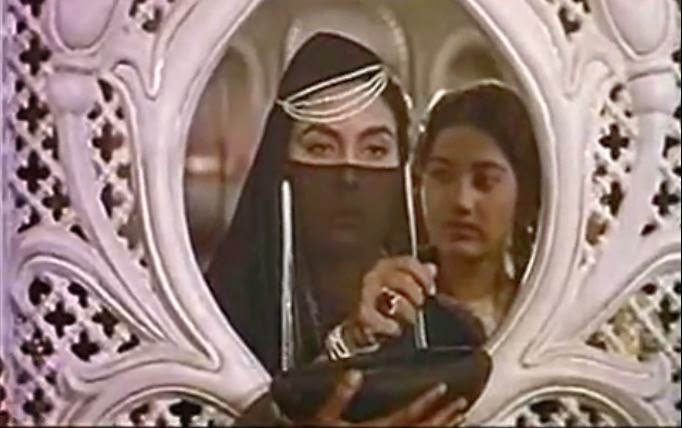 Music: Naushad
Lyrics: Khumar Barabankwi
The provenance of Love and God is interesting. A retelling of the age-old Kais-Laila (better known as Laila-Majnu), K Asif mounted the film with Guru Dutt and Nimmi in 1963. When Dutt’s sudden death in 1964 threw a spanner into the works, Asif signed Sanjeev Kumar to replace Guru Dutt. Unfortunately, Asif died in 1971, and the film remained incomplete. Asif’s assistant director, Mohammed Mehdi Rizvi, struggled to complete the film, and it was eventually released in 1986 – a year after its hero, Sanjeev Kumar had also passed away. Among other things, this song is important for one reason – other than Kishore Kumar, all the great male voices from the golden period seem to have come together for this song. (One clip even included Hemant Kumar as one of the singers. I’m not very sure of that, so I’ve left his name out.) Rahega jahan mein tera naam also segues into Mohammed Rafi’s beautiful rendition of Tumhare dar tak Beautiful.
What songs would you add to this list? Come, refresh my memory of old favourites, and introduce me to some ‘new’ old songs…

Written By: Anuradha Warrier, is a writer, editor, film, and music buff. She writes for pleasure, edits for a living, and indulges in watching films, listening to music, and writing about both on her blog Conversations Over Chai as and when time permits. 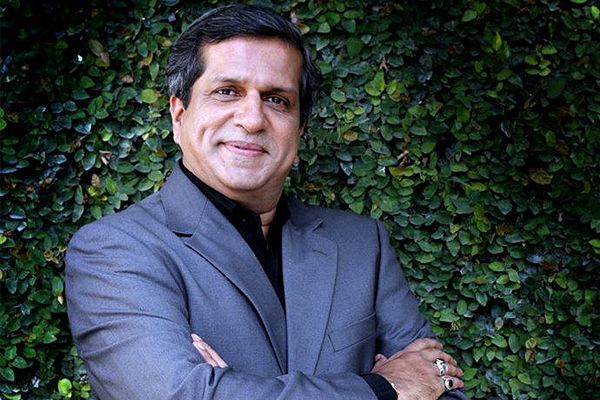 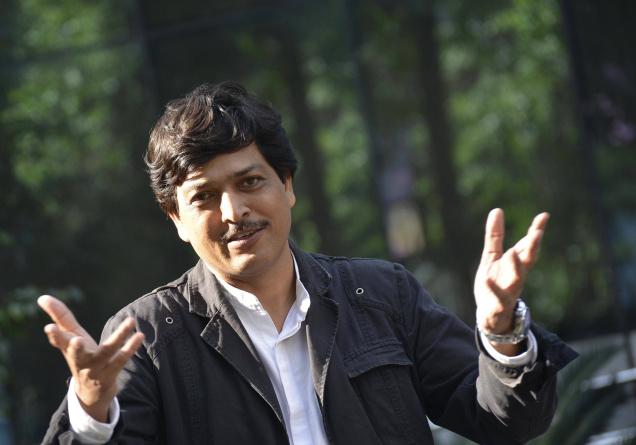 “Barefoot to Goa” is about childhood and innocence – Praveen Morchhale