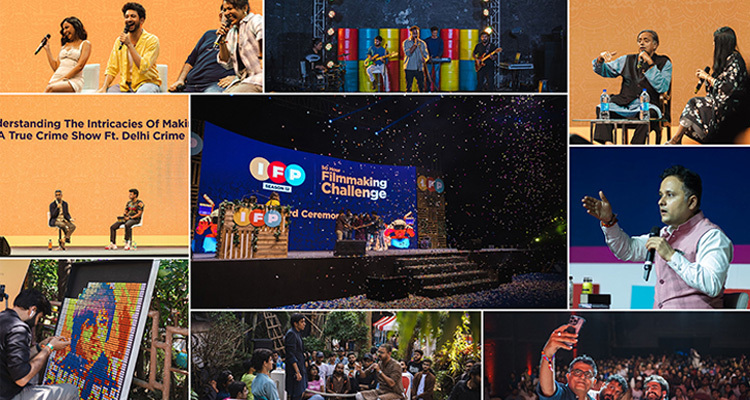 The IFP Season 12 Festival opened its gates on the 8th and 9th of October at Mumbai’s Filmistan Studio. Thousands of creators and renowned artists flew in to participate in this one-of-a-kind celebration of new-age contemporary culture and creativity.

What all was happening:-

& And much more
The first day of the festival had sessions by Emmy award-winning filmmaker Richie Mehta, the illustrious Javed Akhtar, amazing orator Shashi Tharoor, prolific writer Amish Tripathi, and talented music director Sneha Khanwalkar to name a few. The sessions ranged from discussions on cinema vs content, making of Dead Poets Society, compellingly writing Indian mythologies, and many others. The first day also included charismatic live performances by Kanishk Seth (Trio) and Raghav Meattle. Along with all the fun and frolic; intellectual debates ensued on whether RRR should’ve been sent to the Oscars?, are reels art or not?, and many such topics were discussed (or rather battled with). People also interacted with their favorite speakers at the exclusive Fan Zones. One of the key highlights was Anand Gandhi, who spoke to attendees personally even after his time had concluded, due to the overwhelming fanfare! The first day ended on a high note with the 50-Hour Music Challenge Award Ceremony, which was followed by the screening of the critically acclaimed film ‘The Worst Person In The World.

The second day of the festival began with an overwhelming gusto, with a session by internet’s favourite Yashraj Mukhate, followed by the versatile Vijay Varma, veteran director R Balki, and the talented Prajakta Koli to name a few. The sessions on this day ranged from making of Chup: Revenge of the Artist and Mismatched: Season 2, a roundtable of debutant directors who made commendable films this year to a session on how to not write a bad script by Jaideep Saini among many others.

The second day was also replete with performances by IFP’s previous storytelling and music winners as well as live performances from indie artists Hanita Bhambri and Rahgir. The day and the festival came to a close with the much-awaited 50-Hour Filmmaking Challenge Award Ceremony where victorious filmmakers were cheered by a crowd of thousands, a moment they will never forget!

You can get a glimpse of the IFP Season 12 Festival here https://youtu.be/HMSXg_5SETw