Bollywood since it’s early days has always been an expert in portraying ‘romanticism’ on celluloid, the classic ‘love story’, a specialty that has been experimented and mastered through years of relentless practice. But then, when it comes to ‘friendship’ being the primary focus of a film, they would first try to convince you with either ‘love-triangles’ or ‘brothers-separated-in-their-childhood-but-later-united-to-avenge’ kinda concepts! 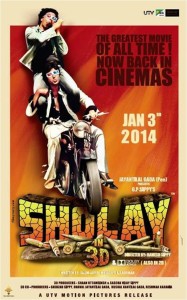 If not, then you will have to choose from films like Chashme Buddoor (1981), Jaane Bhi Do Yaaro(1983) or Andaz Apna Apna (1994) which somehow aren’t primarily made to celebrate ‘friendship’.

And when you are still not convinced, the memorable song ‘Yeh Dosti Hum Nehi Todenge’ would be played ceremoniously from our favorite film Sholay and the topic of ‘friends and friendship’ will be closed then and there. Well, that was the situation before 2001.

In the year 2001, a film Dil Chahta Hai was made and it not only won the National Award for that year but also redefined the concept of friendship in Indian Cinema forever. Super-talented writer/director Farhan Akhtar‘s first film, who later turned out to be a brilliant actor, producer and singer as well!

Film trailer for a quick recap.

The film Dil Chahta Hai, a comedy-drama, is based on three friends whose friendship is tested as they go through a period of transition in their lives. From the enjoyable, carefree college days to accepting responsibility and trying to deal with their jobs and relationships with their recently-earned maturity.

The film was so unique not only as a young and fresh concept but also for it’s innovative overall treatment.

The leads characters – Akash (Aamir Khan), Sid (Akshaye Khanna) and Sameer (Saif Ali Khan); they as individuals and also their superb chemistry in-between themselves were undoubtedly the life of the film. Three friends, a sudden plan, and a long drive to Goa; since Dil Chahta Hai, such road trips have become a trend for the youth of India!

And then, of course, their three love affairs – Shalini (Preity Zinta), Tara (Dimple Kapadia) and Pooja (Sonali Kulkarni), who creates enough drama in their lives but also in a way completes them.

A trendsetter in many ways, the film revived Saif Ali Khan and Akshay Khanna’s career, helped Dimple Kapadia to re-establish herself as a powerful actress, made composer trio Shankar-Ehsaan-Loy as famous as they should be, and most importantly opened the gates for innumerable friendship-oriented films to be made. 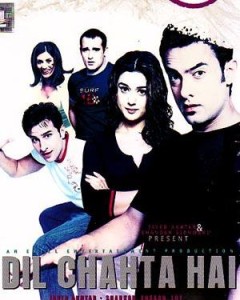 Dil Chahta Hai, when it released was a decent commercial success, especially among the urban younger generation (I believe the film’s primary target audience).  And the critics too applauded it’s sensitivity.

The film Dil Chahta Hai though coated with enough comedy is actually a pretty matured film that sheds a very realistic perspective on growing up and being capable of respecting other’s sentiments.

But the best part of the film is neither the story or the brilliant performances nor the complete set of catchy songs; it’s actually the little funny situations here and there and the perfectly timed dialogues to complement them!

These and many more such hilarious dialogues are the first things that come to our mind when we think of Dil Chahta Hai, and they only make the film such fun to watch every single time.

If somebody, new to Bollywood, would ask me to recommend one single film that he/she needs to watch – i would definitely suggest Dil Chahta Hai. Bollywood at it’s best.