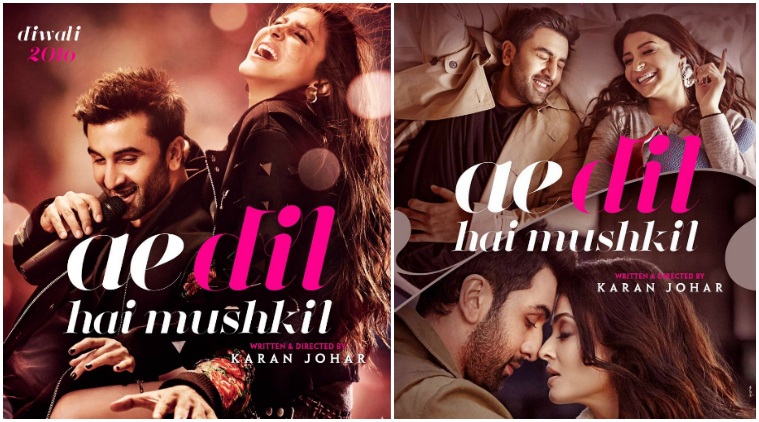 Ae Dil Hai Mushkil is an upcoming romantic drama film written, directed and produced by Karan Johar. It features Aishwarya Rai Bachchan, Ranbir Kapoor, Anushka Sharma and Fawad Khan in the lead roles. The film is scheduled for release on 28 October 2016. The music for Ae Dil Hai Mushkil is composed by Pritam. There are two emotional tangents on the poster – Ranbir and Anushka feature in a jovial mood while Ranbir and Aishwarya offer a glimpse of an intense moment. The film was first announced in November 2014. Writer-director Karan Johar said that for the past year and a half, he had been developing a story that he needed to work on for several months. However, while he was in New York, the idea for Ae Dil Hai Mushkil came to him and he wrote the screenplay in 30 days. When he came back to India, he spoke to the three lead actors and they all signed on immediately. Johar stated that he was motivated to cast Ranbir Kapoor and Anushka Sharma in the film after getting to know them by acting with them in Anurag Kashyap‘s Bombay Velvet (2015). He added that he was excited to cast Aishwarya Rai Bachchan after several unsuccessful attempts to cast her in his previous films like Kuch Kuch Hota Hai (1998), Kabhi Khushi Kabhie Gham (2001), and Kabhi Alvida Naa Kehna (2006).