The system sharks are after the most vulnerable fishes in the water. A fake confession will work well for both the parties but getting one from the innocents needs lot of muscle wrestling exercises. Police brutality in India is probably the most accepted illegal practice today in our system, by our system and for our system. The powerful have been using it for ages to force their control over the powerless but the torture, pain, and brutality Vetri Maaran’s Tamil Film VISARANAI (INTERROGATION) shows is excruciatingly sickening, shocking and real.

A house in a posh colony has been robbed. The top cop at the local police station is feeling the heat solve the case sooner than one can imagine. A group of homeless, poor and powerless men Pandi (‘Attakathi’ Dinesh), Murugan (‘Aadukalam’ Murugadoss), Afsal (Silambarasan) and Kumar (Pradeesh) are arrested. Knowing common language is the only link that connects them with the real culprits. So, the confession of the crime is a must to put the seal on the competency of the police. The interrogation process begins with lathis being charged over bare skin and then, slowly reaching its next level where the damage is done on one’s mental strength. There are times it gets hard to keep looking at the screen. It’s that atrociously real. In one of the scenes, a police officer pleads in order to convince the victims to confess as this would be a ‘favor’ to the top cop.

VISARANAI (INTERROGATION) is an unsettling film that works because it makes you root for its totally defenseless, naïve and fragile characters. They don’t even smell something fishy when cops try to fool them by playing with their hopes to be free someday. The hearts go bleed when you see them joking in pain at each other’s terrible condition. Film in the next half exposes another interrogation far different from the previous but with the same degree of intensity in terms of brutality. A reputed auditor famed for his higher connections in the political and corporate worlds is seen being grilled in an air-conditioned room. He is made comfortable as per his convenience but not for long.

Even he gets crushed under the nexus between political power and the ruthless system when not in use. When discussing the ways to take care of an eyewitness, a wise policeman speaks volumes to establish the importance of a human life and finally, gives it a rest suggesting killing him but not without making him an accused in a pending case. “No human life should go waste”, he concludes. They are too many and all around us.

The film is based on a book by the only survivor in the group having his real life experiences with the visceral police procedural. Though the film does make you feel like watching a thrilling drama at the first that could give you an equal amount of entertainment while opening your eyes towards the heinous human race in uniform around you but sooner or later, you only remember it for being a highly disturbing film. There are moments absolutely existent where I couldn’t trust my intelligence as it is being acted or is a documentation of some actual events captured. VISARANAI (INTERROGATION) is a must-watch because it pinches you to wake up to reality. A reality we all have been denying and becoming numb about! 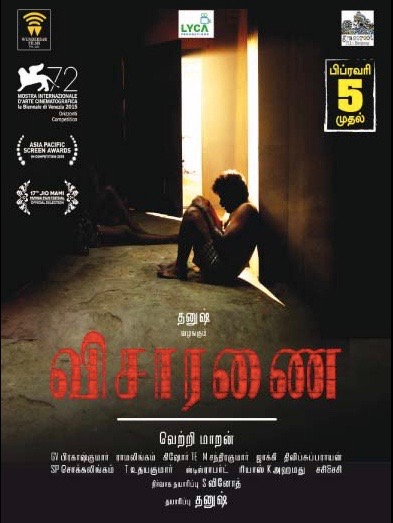