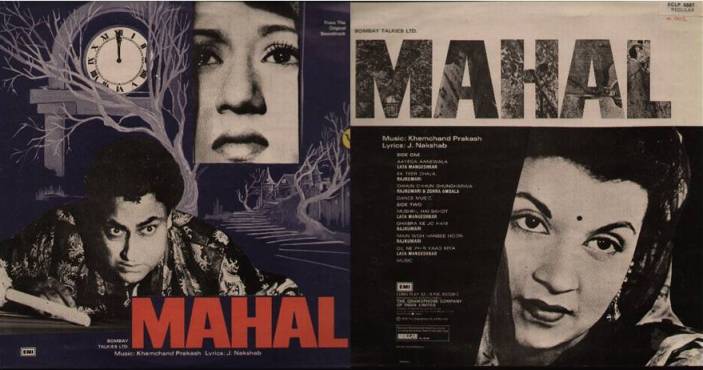 Blast From Past, Review on December 16, 2014 0Comment Bollywoodirect
ShareE-mail

Madhubala.  Ashok Kumar.  The oldest Hindi movie I’ve seen to date, my first from the 1940s.

How could Mahal (“mansion”) be anything but fascinating? 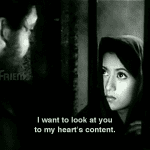 The answer is:  A plodding pace, lengthy expositions of nonsense nonlogic, and a bizarre storyline in which every character seems to suffer from one or another form of mental illness conspire to create a movie that is, in the words of my Twitter friend Gobbledyspook, “Atmospheric, but meh.”

Hari Shankar (Ashok Kumar) has inherited a moody mansion on the outskirts of Allahabad. On his first night there, his gardener narrates a peculiar story of love and tragedy that climaxes with the mysterious disappearance of the home’s builder and his lover. Hari is stunned to discover, from a portrait blown off the wall by a stormy gust, that the man of the tale is a dead ringer for himself. Late that night, he is bewitched by a ghostly singing, and entranced by the apparition of a young woman, Kamini (Madhubala). On urging of his barrister friend Shrinath (Kanu Roy), Hari abandons the mansion and leaves for Kanpur, where he marries Ranjana (Vijayalaxmi), and the woman his father has chosen for him. But Kamini’s eerie singing haunts him – Hari returns to the mansion on compulsion, driven in late night trances to follow Kamini throughout the grounds. The story she tells him terrifies and enthrals him – he is the reincarnation of the mansion’s builder and Kamini, trapped between worlds (or something) when he died, has been roaming the mansions twisting corridors ever since, waiting for his return. Hari is driven to ever more bizarre lengths to uncover the secret that will reunite him with his eternal love – maybe even driven to murder.

I wish I were a funnier writer so that I could do true justice to this bizarre movie. Reviewing it straight just won’t convey how weird and off-the-rails the story really is.  The DVD print opens with this contrite confession: 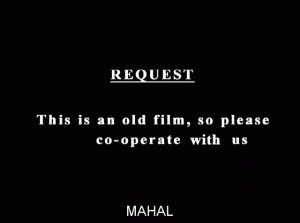 But if it were completely honest, it would say: 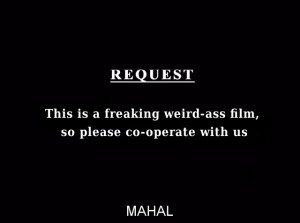 Hari’s symptoms are more indicative of mental illness than janam-transcending love. He suffers from night sweats, auditory hallucinations, and a mysterious somnambulism state that causes him to wander nightly at 2:00 AM and repeatedly fall down sets of stairs.  None of the lengthy and outlandish sequences of exposition explain this strange behaviour, but insanity seems to run in his family – in one particularly weird sequence, his father hands Hari a loaded revolver and orders Hari to kill him on the spot. Kamini, too, is not quite right in the head. In her bizarre-world logic, she and Hari can be reunited only if her spirit occupies the body of the girl who serves Hari’s tea and Hari murders this girl. Go ahead and read that sentence again – I’ll wait. I’m fairly sure it won’t make any more sense the second time around. But the besotted Hari buys it hook, line, and sinker. He even produces his own, even more nonsensical, embellishment upon it at the movie’s tragically ironic conclusion, which feels like something O Henry might have written under the influence of profound depression.

There seems to be no one in this film who is not deranged in one way or another. In an attempt to distract Hari from his fixation on Kamini, Shrinath hires some women of dubious repute to seduce his friend. The result is an uncanny song set in the creepiest brothel ever, populated by women whose dead-eyed expressions are not the least bit tantalizing. 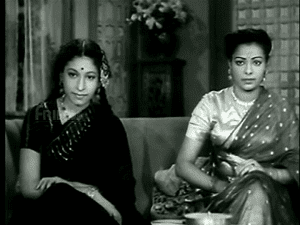 Hari is understandably unimpressed, and flees the place at the stroke of 2, when Kamini’s uncanny voice again calls to him from the ether.

Ranjana, Hari’s beleaguered bride, suffers from debilitating depression as well, but at least hers is well-founded – Ranjana, after all, is married to a psychotic man who is obsessed with an apparition, and who drags her on endless exhausting treks into the mountains. There, he visits mystics and primitive priests, hoping to find – well, whatever it is that he is hoping to find. Poor Ranjana is horrified by one ritual he forces her to witness, a brutal trial and capital punishment of an allegedly adulterous mountain woman. The young woman is forced to dance (and looks preternaturally cheerful doing so, considering the circumstances) while a man who looks like an extra from Amrish Puri’s grotesque scenes in Indiana Jones and the Temple of Doom chucks knives at her. 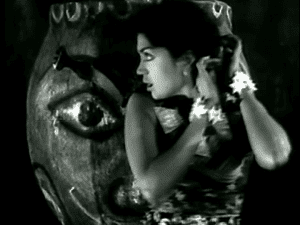 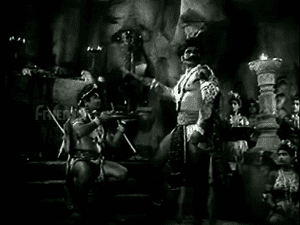 It’s no wonder that Ranjana loses her shit – anyone would, married to such a certifiable nut job as Hari.  (My friend Sonal, with whom I watched Mahal, points out that it was rather brave of Ashok Kumar to take on such a demented role during the upswing of his career.)

Mahal is not all a gruesome parade of horribles.  Ashok Kumar and Madhubala, after all, are both impossibly beautiful, and there are worse fates than spending the duration of a movie gazing at their lovely faces, especially as young as they are here. 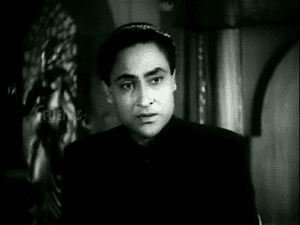 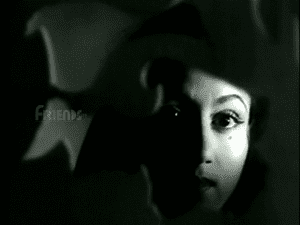 Madhubala’s transcendent beauty matches well with the hauntingly lovely strains of “Aayega, aayega,” perhaps the only worthy legacy of this movie.  But even these quickly become repetitive, as highlighted by Minimal Bollywood Poster’s coincidentally recent take on the film.

There is some creative and wonderful cinematography in Mahal – shots from interesting angles, and shots cleverly framed through arches and wrought-work 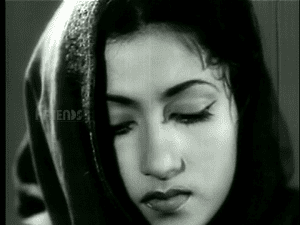 All of this does contribute to the dark, spooky atmosphere of the film, which begins on the proverbial dark and stormy night, and pretty much stays parked in that lot throughout.  Indeed, the movie feels like an extended two-and-a-half hour cinematic Bulwer-Lytton award.

The movie’s pacing is an attempt, too, to establish the otherworldy atmosphere of a ghost tale – it’s rare to see a film where characters consistently talk and move quite so slowly.  In one excruciating scene, Kamini takes Hari on a tortoiselike ambulation through the mansion’s secret passageways, during which she explains their past-life relationship.  She walks him up a stone stairway, step by languorous step, only to turn around at the end and return, just as ponderously, to where they came from.  It’s atmospheric, all right, but the atmosphere is stifling.

In short, even ever-increasing pyaar for the Ashok-Madhubala jodi isn’t quite enough to make me glad I gave a few hours to watching Mahal. But it isn’t a total loss – I had a much better time writing this review than I did watching the movie.  And between this and Ek saal, I have the seeds of a nice collection of shots of Ashok Kumar gazing at pictures of himself. 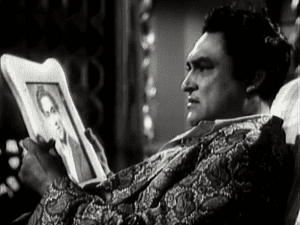 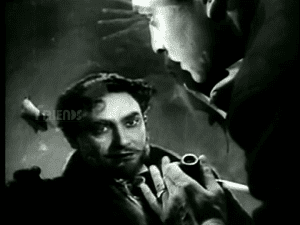 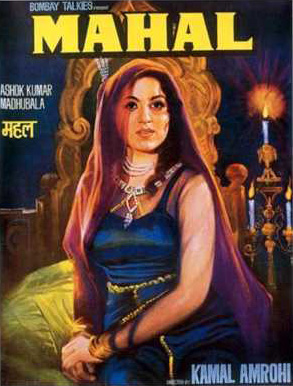 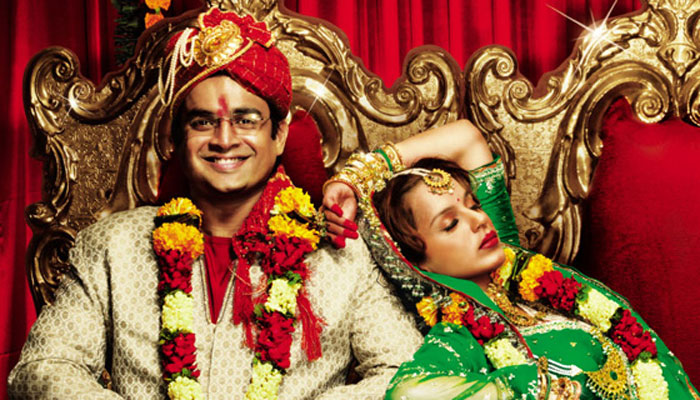 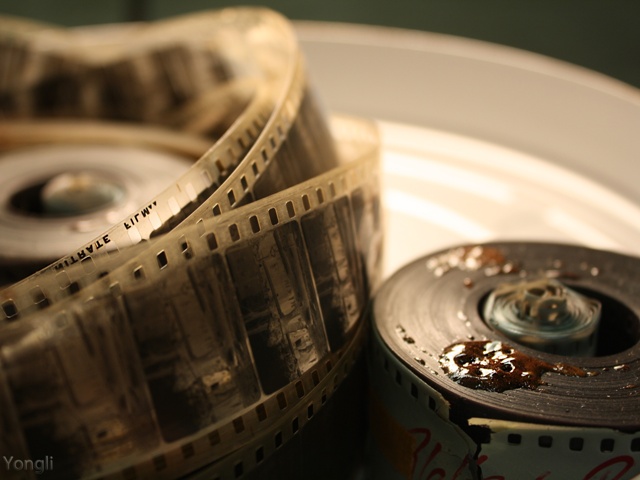