Coming-of-age is the one of the least talked about genres when it comes to Indian Cinema. The fact that it does not make an appearance too often on our screens may be reflective of society’s insensitivity to adolescence or the lack of courage on the part of filmmakers to accurately encapsulate the nuances of that age. Coming-of-age stories bring together the elements of crisis, catharsis, and cure, making it one of the most relatable genres of cinema. These stories of pure emotion and empathy, of composed contemplation and abundant vivacity, never fail to stir something deep within us. They take us on nostalgic trips to the past or lend us a glimpse into our future, letting us know that life’s greatest adventures still lie before us. Here’s bringing to you Siddhima Dubey‘s list of seven coming-of-age films you must watch right now.

THE APU TRILOGY(1955-1959)
Satyajit Ray’s The Apu Trilogy is one of the earliest examples of coming-of-age cinema in India. The first film, Pather Panchali (Song of the Little Road, 1955), is set in Bengal, and follows the life of Apu, a young child, who comes face-to-face with poverty and death for the first time in his life. In the second film in the series, Aparajito (The Unvanquished, 1956), Apu, who is now in Banaras, encounters conflicts within his family and the frailties of adults. He discovers the truths of life and relationships on his own as he deals with the death of his mother. Finally, in the third film, Apur Sansar (The World of Apu, 1959), he experiences the joys and realities of adulthood, sex, marriage and loss. Apur Sansar ends in Calcutta, where everything started as if lending closure to the now mature and evolved Apu’s journey. The Apu Trilogy, which is loved and revered around the world, was recently restored and released in the US.

Udaan, directed by Vikramaditya Motwane, is a sensitive, yet strong portrayal of a boy’s troubled relationship with his oppressive father. The film is satiated with introspective teenage angst, which resonates with the viewers as it mirrors real experiences and portrays  real problems. Taking us through  a plethora of emotions, the film is a cathartic journey for both  the characters and viewers alike. With Motwane’s directorial brilliance, strong performances by Rajat Barmecha, Ronit Roy  and Manjot Singh, beautiful poems and  scenes that linger on for a very long time, Udaan is a must watch for all age groups.

GANDU (2010)
Usually termed  anti-Bollywood for all its elements, the Bengali film Gandu is the most unusual coming-of-age drama. The black and white film (with just a drop of colour) is a story of an aspiring rapper in Bengal. The film is named after the main character Gandu, an anti-social, escapist and frustrated teenager. The  extremely complex protagonist is not the average Indian film hero. Most of the film is set in a dark fantasy and there is little reality to the journey and experiences of Gandu. Underlining the themes of urban poverty, traumatic adolescence, and drug abuse, this film does not merely touch you, it shocks you and makes you think. Gandu is an artistic expression and director Q has experimented with a new style of storytelling. It breaks the monotony of any Indian film you’ve seen till date. A must watch for cinema enthusiasts.

SIDLINGU (2012)
Kannada film Sidlingu, directed by Vijaya Prasad, is an emotional coming-of-age tale of an ambitious boy. Sidlingu’sonly ambition is to own a vintage car. A zany youngster, Sidlingu unabashedly befriends anyone who owns a car, just to live the excitement of owning one. From being seduced by Andalamma, the lecturer, to the loss of his parents, and finally falling in love with Mangala, a teacher, Sidlingu goes through  it all. The narrative is full of innuendos, capturing the essence of Sidlingu’s character and age as he grows up. The honesty of his character is beautifully portrayed in many sequences. Presenting the themes of teenage infatuations, aspirations, and dreams, this film brings to us an extremely engaging story with a surprising end. Intelligent dialogue, real performances by Yogesh and Ramya, and good storytelling combined with imaginative camera work makes this film an entertaining ride.

KODIYETTAM (1977)
What makes this Malayalam coming-of-age tale intriguing is the fact that it is the story of a middle-aged man. Structured around the festivals in a village temple, this film, directed by Adoor Gopalakrishnan, revolves around Shankaran Kutty, played by Bharat Gopi. Shankaran lives the lifestyle of a child–he plays around, attends village festivals and roams about aimlessly. With no direction in life, Shankaran is completely dependent on his sister, who is trying hard to make him a responsible adult. Marriage, the loss of a loved friend and a challenging job makes Shankaran come to terms with the realities of human relationships. He slowly discovers himself and his identity as an individual. This beautiful journey of a man, who refuses to accept adulthood and the harsh realities of the rural life, is an experience of its own. Kodiyettam is a poignant tale of the little child inside all of us. This film will make you rediscover adulthood.

FANDRY (2013)
Caste systems have always decided the fate of lovers in our society. Marathi film Fandry, directed by NagrajManjule, is a close reflection of the brutalities and the atrocities of our society. Dealing with the themes of caste and identity, the film revolves around the aspirations of the protagonist Jabya, who is a Dalit. He is in love with Shalu, who belongs to an upper caste. Apart from being in Shalu’s good books, his only desire is to catch an elusive black sparrow. Jabya’s identity crisis stems from his social status because his father makes a living killing pigs and doing odd jobs in the village. The story takes you through Jabya’s experience of being treated as an untouchable and his struggle to break free. The love story is beautifully woven in with the social drama which makes it more engaging. Fandry is a must-watch, as it captures the intra-psychic conflicts of the orthodox society and their beliefs.

The Tamil film Azhiyadha Kolangal is a coming-of-age tale of three boys, their experiences growing up in a period that binds them together. The film begins with Gowrishankar receiving a letter from an old friend, which takes back to his adolescence. Gowrishankar and his friends, Pattabi and Raghupathi, live in a small village. Their relationship experiences a downfall when all of them get attracted to Indumati, a new teacher. 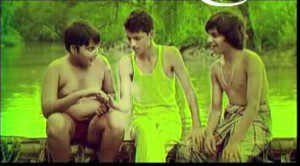 Their attempts to impress her and the repercussions of this teenage infatuation forms the rest of the film. Azhiyadha   Kolangal explores the common themes of infatuation, excitement, competition and explains the importance of   friendships and relationships in the formative years of an individual’s life. Balu Mahendra’s partly autobiographical   project with its innovative camera work is worth a watch.